TEACH ME TONIGHT – THE COLLECTION

KISS OF THE WILD WOLF

All Nina O’Rourke wants is a baby, a child to bring joy to her husband in his final  days before he succumbs to a ravaging illness, and someone to love as she faces the future alone.  Everything about the plan is crazy – Nina’s not the kind of woman who picks up a gorgeous stranger for a night of incredible sex.  But she’s not about to turn away when tall, dark, and delicious Malcolm Trask appears on the side of the road, willing to give her anything and everything she craves.  After a night of intense passion, the likes of which she’s never known, Nina assumes they’ll never see each other again.  Soon after, she finds herself pregnant and widowed, at the mercy of greedy former in-laws, and her future seems more than a little uncertain.  Crossing paths with her hot one night stand is humiliating enough, but maybe he can explain these strange symptoms she’s having…

Billionaire CEO and wolf shifter Malcolm Trask has never been used for sex and dumped before, and the feeling isn’t pleasant.  When the pretty little human who rocked his world stumbles into his life again, he is shocked to find her pregnant and in distress.  Knowing that bringing her into the family will cause tension, not to mention a possible war with a neighboring pack, Malcolm is still determined to protect her and figure out a way to tell her that the baby she’s carrying is less than human.  She can’t be his, but can he find the strength to let her go before he loses his heart to her completely?

SHADOW OF THE RAVEN (HEARTS OF STONE – PREQUEL NOVELLA) 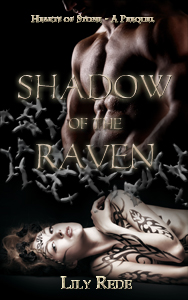 Araven is waiting to come into her true powers – for centuries the witch has catered to the magical world, trading minor spells and hexes for favors and staying off the capricious gods’ radar whenever possible.  When Erebus, a minor deity of darkness, asks for a spell to imprison his enemies, Araven hesitates – such a spell would require powerful magic.  She is tempted by his promise to increase her powers, but fears what Erebus will do to magic and humankind.

Torn, Araven turns to Cal, the Muse of epic song and poetry – a virile demigod with an unflinching sense of justice, but no interest in the needs of the lowly humans.  In fact, Cal’s only interest is his own idealistic philosophy, and in the seduction of the lovely witch in front of him.  Caught in the throes of passion, neither witch nor muse pay any attention when Araven’s traitorous shadow slips away, drawn by the powerful deity of darkness, ready to do his bidding and bring about a seismic shift in the magical world as they know it…

SAFE FROM THE STORM – BRIGHT’S FERRY #3 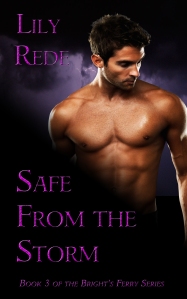 Sheriff Tony Arnetto has been going through the motions since his wife Nora disappeared in a sailing accident five years ago, leaving behind a mysterious inheritance, a shadowy ex-husband, and a pile of questions that make Tony wonder if he even knew the beautiful redhead at all.  When she shows up in Bright’s  Ferry, alive and desperate for his help, Tony finds his world turned upside down.  Torn between love and anger, he struggles to deal with her sudden reappearance in his life, even as the town braces for the storm of the century.

Nora Allen’s past is catching up to her.  Unable to outrun her vicious and manipulative first husband any longer, she’s been forced back to Bright’s Ferry to get Tony to sign over her fortune and hopefully convince the evil Steffen Decelles to leave her in peace at last.  To start over.  However, Nora doesn’t count on Steffen’s desire for revenge or Tony’s stubborn resentment despite the electricity that still sparks whenever Nora comes close to her sexy sheriff.  With the water rising and passion spinning them out of control, Nora and Tony face off against a madman and each other, forced to accept their past if they have any chance of a future.

Widow Mercy Field knows there’s something in the woods.  The villagers in her small colonial community whisper about wolf-like devils and abomination, and send groups of men into the dark to hunt the monsters.  But Mercy has other things to worry about – since her boorish husband’s death, the village has been pressing her to marry again, and Mercy can feel the noose tightening.  One night, as the villagers celebrate their latest wolf-hunt, Mercy stumbles upon a lone survivor in the woods – half man, half wolf – caught in a trap and snagged on a thorny briar patch.  Despite her fear, she decides to help the poor creature, unaware that Fate has stepped in to change their lives forever.

Shadrach knows his mate the moment her luscious scent tickles his nose, but can he accept a human woman from the village that slaughtered his people?  At her mercy, Shad can only let her care for him and wonder if this shy woman is the key to the revival of his pack, or a siren luring him to his doom.  Together, they must face their fears and learn to accept each other, even as the village’s horror and Shad’s loyalty to his kind threaten to tear them apart.