A spicy little excerpt from MORE THAN A NIGHT, right at the start of Erin and Henry’s assignation.  If I’m a good little writer, look for this at the end of the week! 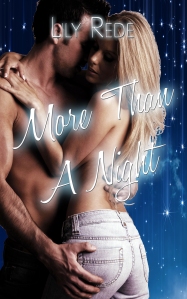 For a moment Henry wished she were the jaded cougar he’d been expecting, not this fresh, blue-eyed goddess in training whose eyes shone with nerves and confused heat.

He couldn’t be the one to walk away – he needed this, but perversely, a part of him wanted to push her to the point where she kicked him out.  Somehow that would make him feel less cheap about the whole thing.

Erin wasn’t looking at him like he was cheap, though.  She was staring at his bare torso like she’d won the fucking lottery.  It set off something warm and fluttery low in his abdomen that had his dick pounding for her.

“I’ve never touched a naked man before,” she confessed, and the feel of her soft fingers trailing fire down his chest had his breath hitching, “At least, not like this.”

“I’m not naked yet,” he pointed out, wondering how far he could push her before she bolted.

But she brushed those fucking soft knuckles against his stomach and then lower to the heavy bulge behind his zipper and he actually felt dizzy as blood surged to his cock.  Erin slowly undid his belt buckle and unfastened the single button at the top.  Carefully, she pulled his zipper down, the sound loud and shockingly erotic in the quiet room.  He could hear her breath coming fast, her excitement evident from the way her luscious breasts rose and fell under her sweater, from the flush in her cheeks as she sank to sit on the bed before tracing the shaft beneath the cotton with eager fingers.   Through it, Henry struggled to remain passive, to let her explore, never mind that he was going to die if she didn’t touch him skin to skin within the next ten seconds.  That or come all over her with no finesse whatsoever.

Erin’s gaze flickered up to his, and whatever she saw in his face must have reassured her, because she finally tugged jeans and boxer briefs down to free his cock, and he felt a purely masculine stroke to his ego at her little gasp.

“What do you think?” Henry had to ask, gritting his teeth as she tentatively wrapped her hand around the thick shaft for a gentle squeeze.

“You’re…bigger than I expected.  Hard, but the skin is so soft…and hot…”

He groaned as her thumb swirled delicately over the crown, rubbing the bead of moisture into the head.

“Does that feel good?” she whispered.

“Yeah,” he managed, his eyes drifting shut in pleasure as she stroked him, learning his shape, finding the places that made him shudder, and sharp talons of sensation grabbed hold.

Better than good.  Like heaven and hell wrapped up in one sweet little package.

Henry was shocked back to earth at the feel of petal soft lips tracing the wide collar of his cock, followed by the lap of a wet, curious tongue.  Heat surged through him.

He stumbled back, taking a firm grip on himself to fend off the explosion while he frantically thought about feed prices until he had himself under control.

Erin looked horrified and embarrassed, and Henry realized that in five seconds flat, he could scare her away, make her realize what a huge mistake this was, but…he couldn’t do it.  She wanted him to give her a night of pleasure, and he was damn well going to give it his best shot.  Paid for or not, every woman deserved a first time that was special.  Hell, it should be special every time.

“You didn’t do anything wrong,” he assured her, “I’m just…you’ve got me a little revved up.  Keep doing that and you might get more than you bargained for your first time.”

Her eyes drifted down again, and she licked her lower lip as though evaluating his taste.  She licked again.

“Son of a bitch,” he muttered and stepped forward to haul her to her feet and into his arms , his mouth coming down hard on hers.  Erin was stiff for a moment and then moaned and let him in. The hint of his own flavor on her tongue stirred something primal in Henry, as though he’d claimed her and marked her as his own.  The combination of mint and warm Erin was already headily familiar.  He gentled his touch, letting her learn his mouth, feeling fire shudder through him as her tongue shyly came out to play with his and her body relaxed to mold every delicious curve against his hardness.